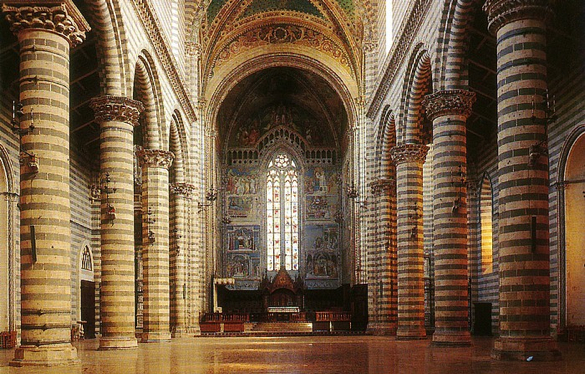 I was in Orvieto for 3 days and recorded some sound during the morning, trying to avoid the tourists. I always try to find the cathedral without too many people but at the same time there must been some, because their sounds allow us to perceive the reverb of the space.

Moreover, I’ve recorded voices from a choir during a celebration and I’ve utilised a sample of the organ of the cathedrals. The Dome of Orvieto is a fantastic gothic church. Orvieto is an Etruscan city and it’s on a hill in which caves were excavated by the Etruscans. During the Second World War the Nazis didn’t bomb Orvieto because of the amazing cathedral that they wanted to take back to Germany!

I was for one week and recorded sounds within the interior of the Basilica where the relics of Saint Francis are kept. It is a really dark place where there are a lot of passages with stairs to reach the crypt. There are many frescoes by Giotto – really wonderful. It is a place of meditation and there is an incredible silence, although you have to find the Basilica without tourists early in the morning. I was seated in front of the stone of the relics for a long time each day. There are a lot of guards that control everything – especially people like me who were there everyday. At the end of the track you can hear a chant by nuns recorded from within the Basilica. They were behind a window and it was a fantastic experience.

3. The Cathedral of Saint Germain, Paris

This was the first Cathedral of Paris built around 500 A.D. I found within this cathedral a crazy English woman that was telling stories and laughing to herself. I stayed close to her and she thought I wanted to kill her; so she attacked and punched me. I’ve recorded organs and chanting voices. The distorted sounds are pitched organs.

This is the leasst organised composition because it is almost impossible to recorded the reverb of this place because of the tourist that are there all the day at every hour. But I’ve managed to record an organ session and a mass.